Known as the “Golden Rock of the Caribbean,” St. Eustatius, or Statia for short, was once the busiest trading port in the world. The reason was that the Dutch had turned it into a duty-free port. During the American Revolution, arms and gunpowder were smuggled through Statia to the rebelling colonies. St. Eustatius is a relatively small volcanic island in the Caribbean Netherlands. The island changed hands more than twenty times between the French, British, and Dutch, with the Dutch ending up with it in the end. Apparently everybody wanted it, but not enough to defend it well. 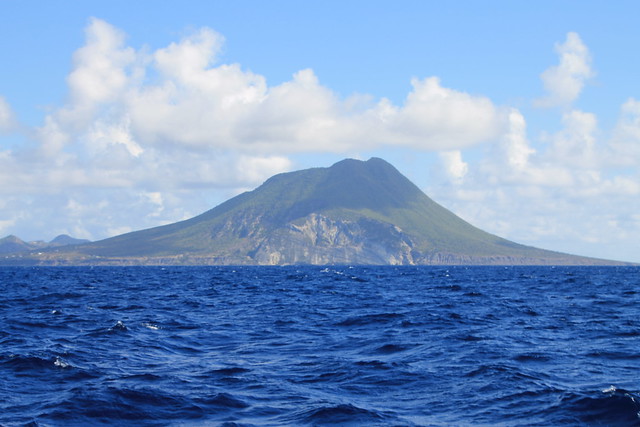 The island is about four miles long, with large hills at one end, and a huge volcano called the Quill at the other. “Kuil” in Dutch means “OMG, that’s a big pit!” Fortunately, it has not erupted for thousands of years. Because of the island’s relative roundness, it makes for very rolly anchoring. The official language is Dutch, so of course everybody speaks English. The island economy is dependent on fishing, small businesses, and tourism.

Dad needed to work, so when he and mom went ashore to check in, he bought some internet. They also scoped out the community, and mom bought national park passes to go hiking on the Quill. When they got back, we packed up lunches and waters, and had the usual discussion about which shoes to wear. For me, the choice was easy: sneakers or crocs. Duh.  Mom ate some breakfast, and Dad ferried us over to the island.

As we surmounted the cliff that surrounds most of the island, I noted aloud what a long way away the actual mountain seemed to be. “Oh, it’s only a thirty minute walk” mom answered. Unsurprisingly, “walk” turned out to be an understatement. Our route to the mountain, Rosemary Lane, led in a straight line for what seemed like a mile and a half at a 30 degree incline. Only at the top of this did the actual hike begin.

Rachel almost made it to the top of the lane before complaining that she was tired. Mom managed to cajole her to the beginning of the trail, where we took a short break. After lightening the water-carrier’s load a little, we started the hike to the crater rim in earnest.

The hike was long. Not particularly difficult, just long. The rim trail wound up the mountainside in such a way to make the route feel like it was uphill both ways. The entire mountain was heavily forested, so the view was limited. By limited, I mean nonexistent. There was only one break in the trees, high up on the mountainside. From over 1000 feet, we got a great view of Oranjestad, the only city on the island, and our tiny boat in the harbor. We paused for a moment to enjoy the vista, and then it was back to the ever-steepening trail.

Aaron, Sam and I soon drew ahead of the others. Empowered by handfuls of goldfish crackers, we reached the summit well before everyone else. Our chests heaving, we staggered over to the rocky edge, and looked down into the crater.  Boy, was the view worth the hike. The crater floor almost a thousand feet below us was densely forested. Steep rock walls rose up on all sides to form the rim. Off to sea in the other direction, Saba, another volcanic island, was clearly visible. We ate our lunch while we waited for the others to catch up. 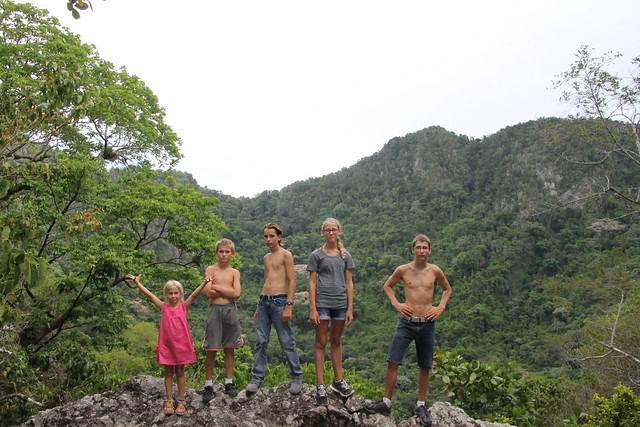 When they did eventually reach the top, they were equally impressed. They ate their lunches, and we discussed what to do. Rachel was tired and thirsty, as she had drunk all of her water on the ascent. Aaron and I still had some steam left, so we opted to go down the path into the crater. Mom gave us an hour to explore before we had to come back. She also gave us dad’s nice camera to take pictures of what we saw, but characteristically forgot to show us how to use it. We took our still-half-full water bottles, and descended into the crater. The hike down was short, but steep, in contrast to the relatively gentle slope of the hike to the rim. Ropes were stretched between trees at irregular intervals, to provide support in navigating the treacherous terrain. A dense rainforest filled the crater, with huge trees over 65 feet high. Large boulders lay all around. Thick green moss covered everything, accompanied by the scent of decaying leaves.

We had not been walking long before we came across a simply huge banyan tree. I knew I had to climb it. Aaron plopped the pack down, and sat on a rock and took out the camera. I went over to the tree, and tried to find a route up it. I settled on a thickish vine, and started climbing. Shimmying up the vine in this manner forced me to practically hug the tree. I might add that I had neglected to put my shirt back on after hiking (we were hot). As I write this, I periodically pause to scratch at the itchy rash that has magically appeared all over my chest and arms. Oh well. It was a cool tree anyhow. After about five minutes, I got tired of watching Aaron wrestle with the camera from a height of 30 feet, and came down. We continued down the sparsely marked trail. Once we saw a lone goat cross the path ahead of us. The trail was a loop, so we ended up going back the way we started. We climbed back up the jumbled slope to the others.

They had spent the hour playing with a chicken that had followed us up (and feeding it peanut butter and jelly sandwiches). Rachel was at this point very tired, and making it very well known. I took the time to eat an apple and drink the last of my water. We eventually convinced Rachel that the only way to go home was to go back down the path, and set off. Sarah, Sam, and Aaron soon pulled ahead. I was more tired (yes, even I get tired sometimes), and stayed up at the top to rest and finish my apple. When I was done, I followed Mom and Rachel. Unfortunately, Rachel had decided to wear a dress on the hike, and there were lots of roots across the trail. We’ll just say she fell down a lot.

We noticed nothing new on the trek down. Same trees. Same rocks. Same chickens. And then we reached the road at the foot of the volcano. The walk down Rosemary Lane was arguably worse than the hike. At least on the mountain there was shade and some breeze. The day had started out cloudy, but had turned into a first-rate tropical scorcher. Mom promised ice cream to keep the fainter members of the crew going. Tired and hot, the hardy mountaineers staggered through Oranjestad in search of ice cream. The first place we tried, the Cool Corner sounded likely, but turned out to be a pub. Mazinga’s, however, a gift shop named after the highest peak on the Quill, had a cold-snacks freezer. Mom, true to her word, bought us all an ice cream cone while we waited for dad to pick us up in the dinghy. We had been gone all day, and had had a great time. Anybody who doesn’t believe me can take a hike.