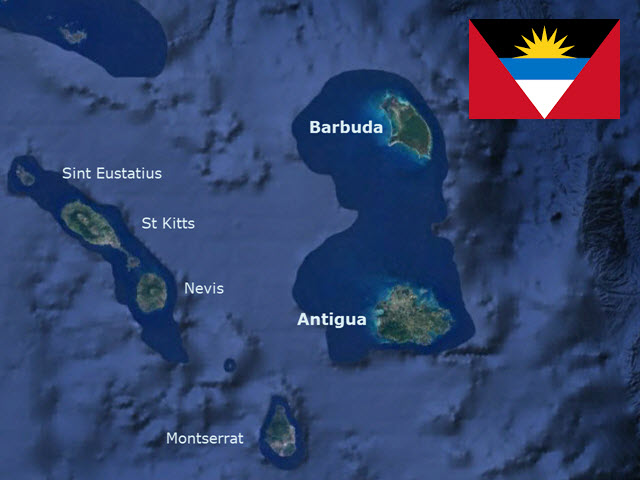 Capital: St. John, Antigua
People/Customs: The population on Antigua is approximately 65,000, on Barbuda, 1200. About 90% of the population are of African descent, but there are also British and Portuguese roots on the islands.
Language: English
Climate: In the Winter the high is around 81°, the low, 72°. In the Summer, the high is 86°, the low, 77°. Hurricane Season is from June to November.
Food/Farming: There are local fishermen in the waters around Antigua and Barbuda, and banana trees are grown. Due to the plentiful mangoes, a mango festival is held every summer.
Government: Antigua and Barbuda are an independent nation inside the British Commonwealth and have a Prime Minister.
Currency: Antigua and Barbuda use the East Caribbean Dollar.
Art/Music/Culture: Cricket is the most commonly played sport here, and Calypso and Reggae are popular musical styles.

Columbus sighted this island in 1493 and named it after a church in Seville, Spain. The British colonized Antigua and grew indigo and tobacco. In 1674 Christopher Codrington established Betty’s Hope, where one still can go to see how sugar cane was processed. Slaves were imported from Africa for work on the plantations and rum distilleries. Barbuda was used mainly for farming food for the slaves. Several fortifications were built around Antigua. The British used Antigua for careening and repairing ships, starting in the 1740’s. Horatio Nelson served a few years in English Harbour; a museum at Nelson’s Dockyard commemorates his time there. By the end of the 18th century the demand for sugar dropped and the economy crashed. Slavery was ended in 1834, and the sugar plantations have been left inoperable since. In 1967 Antigua became an Associated State of the United Kingdom. It won its full independence in 1981. Tourism is now the island’s main industry, with many sailing regattas attracting a large international crowd.

One of Antigua’s interesting land forms is a natural bridge, Devil’s Bridge, caused by tides and wave action. The island is volcanic, 108 square miles, and 1319 feet high at the topmost point. Open plains and scrublands are abundant. Antigua also has many white sand beaches, popular with tourists.