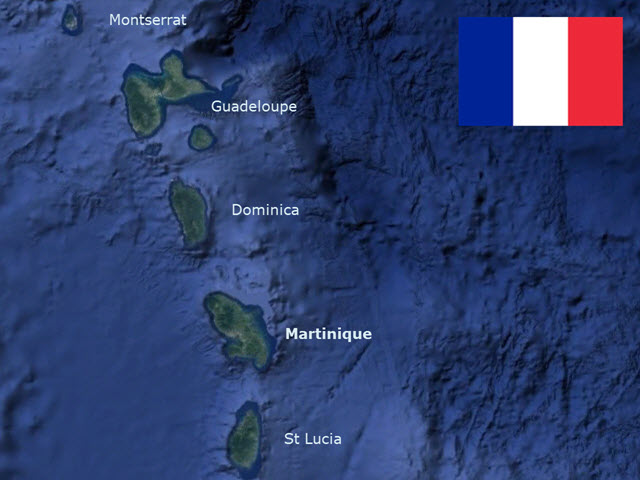 Capital: Fort-de-France
People/Customs: An estimated 400,000 people live on Martinique.
Language: French
Climate: In the winter the high is around 81°, the low, 72°. In the summer, the high is 86°, the low, 77°. Hurricane season (rainy season) is from June to November.
Food/Farming: Sugar cane, bananas and pineapples are the leading crops. “Rhum Agricole” is distilled from sugar cane juice for local use and export.
Government: Martinique is an Overseas Territory of France and is represented in parliament by 4 deputies and 2 senators.
Currency: Euros are used in Martinique.
Art/Music/Culture: French and Creole/African influences affect food, language, art, music and culture. The food is French-style cooking, altered to use tropical fruits and vegetables.

Columbus sighted Martinique in 1493, and sometime later French settlers established a fort there. The Caribs fought against the French but were exterminated by 1660. In 1636 King Louis the XIII authorized the transportation of slaves to work on the sugar plantations. From 1794 to 1815, England had control of the island during the French Revolution. French took back Martinique after the Revolution in a time of stability. The capital of the island, often called “the Paris of the Caribbean,” was St. Pierre until 1902, when Mount Pelée erupted and destroyed St. Pierre and killed 30,000 people. Fort-de-France was made the permanent capital. St. Pierre was rebuilt but never returned to its former state. In 1946 Martinique became an Overseas Department of France, and in 1974 it was promoted to a Region of France. Today it is a major tourist destination for French-speaking people.

Martinique is a volcanic island with an area of 1,080 square kilometers and its highest point is 1,397 meters above sea level. Most of the island is covered in rainforest. Anoles, snakes, and opossums are common; among the endangered species are the Martinique Trembler, the White-breasted Trembler and the White-breasted Thresher.

In St. Pierre, take a walking tour or Petit Train Tour (if you speak French) of the old city and ruins, visit the volcano museum to see artifacts from the eruption of Mt. Pelée, or hike the aqueduct built by slaves. Go to the beach, zoo, or Botanical Gardens in Le Cabret. In Fort de France, there are shops, parks, a library, and an old fort. There are traditional sailboat races, “La Rond Des Yoles,” as part of Bastille day celebrations in July. In St. Anne, there are beautiful beaches, water sports and a floating water fun park. Eating is a major attraction in Martinique—go to ice cream shops, crêpe stands, patisseries and boulangeries (for pastries and bread), and shops with cheese, wine, and chocolate.