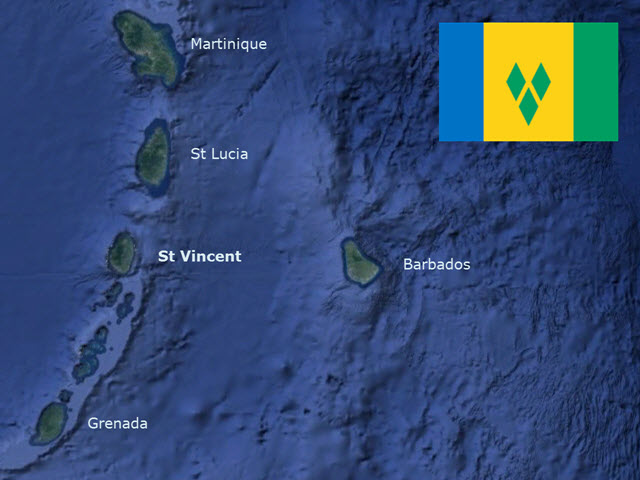 Capital: Kingstown, St. Vincent
People/Customs: St. Vincent and the Grenadines has a population of 112,000, mostly descended from African slaves, with some Scottish, English, Irish, French, Asian, and Caribs.
Language: English, with locals speaking a French Patois.
Climate: In January the daily high temperature is 81°, and the low is around 72°. In July the average daily high is 86°, while the low averages 76°. Hurricane (rainy) season is June to November.
Food/Farming: Bananas, Arrowroot, Coconut, Cocoa, and Spices.
Government: St. Vincent and the Grenadines is an independent nation within the British Commonwealth.
Currency: East Caribbean Dollar
Art/Music/Culture: Reggae, Calypso, and Steel Band music is popular in St. Vincent, and common sports are cricket and football (soccer).

Spanish explorers discovered St. Vincent in the 1500s, and in the early 1700s French settlers established plantations on the island. The British and French fought over St. Vincent and the Grenadines and in 1783 the Treaty of Paris gave the islands to Britain. In 1812 the Soufrière volcano erupted and wiped out cocoa, coffee, and sugar plantations. Most plantations were abandoned after slavery was abolished in 1834, but those that had remained in use were further diminished by a hurricane in 1898 and another volcano eruption in 1902. Small farmers then continued to use the plantations as farmland. In 1969 St. Vincent and the Grenadines became a self-governing state of Britain, and gained full independence as a nation inside British Commonwealth in 1979.

St. Vincent has an elevation of 4048 feet. St. Vincent is around 133 square miles, and the Grenadines, consisting of several islands, (the main ones being Bequia, Canouan, Mustique, Mayreau and the Tobago Cays, and Union),  are around 17 square miles in all. The St. Vincent Parrot is the national bird and it is endangered. There are also protected coral reefs with many species of fish and sea turtles.

There are botanical gardens on St. Vincent, a whaling museum on Bequia, and the Tobago Cays have a Sea Turtle Sanctuary. Union Island is known for kiteboarding.