Editor’s Note: We welcome Sam as the new author of the Take Two Sailing Geography Reports! 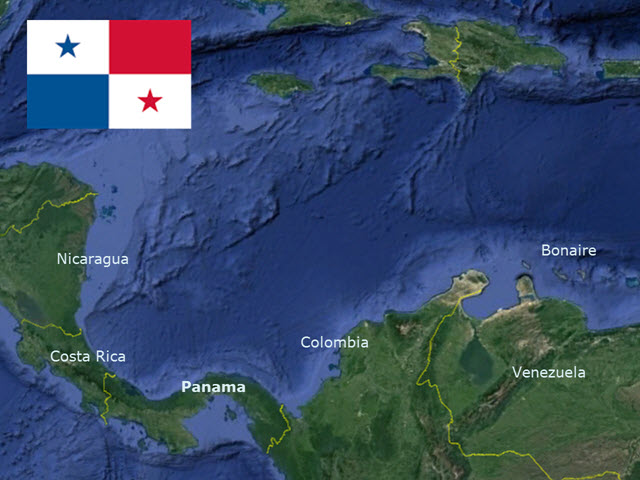 People/Customs: Population is 4.1 million, made up of mostly Mestizo and Native people groups, also some Afro-Panamanians, Mulattos, and Whites. Most people are Catholic, with some Protestants and a few indigenous religions.

Climate: Tropical, with a wet and dry season. The rainy season is in between May and December, and the Caribbean side gets twice as much rain as the Pacific side. Panamá lies outside of the hurricane belt. Average temperatures are between 75°F and 86°F, though it is significantly cooler in the mountains.

Food/Farming: Fish, Beef, Pork, Chicken and Eggs are produced here. Corn, rice, and bread are popular staples, and a large variety of tropical fruits and vegetables, such as mangoes, citrus, passion fruit, pineapples, bananas, and plantains are grown in Panamá.

Government: Constitutional Republic with a President and a National Assembly.

Currency: the Balboa, equivalent to, and interchangeable with, the U.S. Dollar

Art/Music/Culture: The music and culture is influenced by a mixture of Indigenous, Spanish, and African traditions. The Guna people sew a kind of colorful quilted art called molas. A Christmas parade is held in the capital every December 25th with people dancing in traditional costumes, and Carnival is held in February with loud music, elaborate costumes, and parades.

In 1501, Panamá was discovered by a Spanish explorer named Rodrigo de Bastides. Until his death in 1506, Christopher Colombus governed the area stretching from Panama to Honduras. In 1513, the Spanish conquistador, Vasco Nuñez de Balboa, was the first European to see the Pacific Ocean. In 1519, a Spaniard named Pedro Arias de Avila founded the city of Panamá on the Pacific side. The Spanish used the isthmus for transporting gold looted from South America to ships headed for Spain.  In 1572, English privateer and explorer, Francis Drake, destroyed one of the first towns built in Panamá, and after he did this he sailed away with Spanish gold. In 1671, the buccaneer Sir Henry Morgan sailed up the Chagres River, looted, and destroyed the city of Panamá. The city was rebuilt, but there was no way to stop pirates from taking Spanish gold. In 1739, Admiral Edward Vernon destroyed the fortress of Portobelo, so the Spanish decided to sail all the way around South America rather than carrying their gold across the isthmus.

Spain lost nearly all of its colonial possessions in the 18th century in the Napoleonic Wars, and Panama won its independence from Spain in 1821 as part of Gran Colombia, liberated by Simón Bolivar. In 1846, the U.S. was granted permission to build a railroad across Panamá, which grew wealthy from people traveling across the isthmus. In 1881, the French tried to build a sea-level canal across Panamá, but the mosquitos and rainy season made this impossible.

The United States, in a bid to get control of the project, helped Panamá fight against Colombia for its independence in 1903. In exchange, they would build the canal. They tried a new strategy, building locks, damming a river, and using a lake to get across. In 1914, the Panamá Canal was finished, and the first ship sailed through—they had succeeded in building a passage that connected the Atlantic and Pacific Oceans, making trade and shipping much easier. The United States controlled the Canal completely until the 1970’s, collecting concessions and using the strip of land on either side as a military base.

After the death of the leader General Omar Torrijos in 1981, military leader Manuel Antonio Noriega took control of the Panamanian government and formed a dictatorship, declaring himself president and growing the military. He was accused of corruption and doing business with Colombian cocaine cartels, killing his opponents, and rigging elections. In 1989, he re-elected himself, and the first thing he did was to declare war on the U.S., who had imposed economic sanctions and refused to pay canal fees. Of course, the U.S. won in a very short time, and Noriega was captured, tried, and sentenced on conspiracy charges. He was flown to Florida to spend decades in jail.

Meanwhile, resistance to U.S. control of the canal had grown, and the conflicts sometimes grew violent. After a series of treaties in the 1970’s and 1980’s, the United States ceded complete control of the Canal to the Panamanians in 1999. Also, in 1999, the first female Panamanian president, Mireya Moscoso was elected. Noriega did not return to Panamá until 2011.

Today, Panamá is exporting tropical fruit and building its tourism industry, attracting people from all over the world to its beautiful islands, beaches, mountains, and national parks, and is continuing to profit from the ships that transit the Panamá Canal. A new set of larger locks were finished in 2016.

Panamá is an isthmus, a land bridge that connects North America to South America. There is a 50-mile canal across the middle section. Panamá is about 35 miles wide at its narrowest point. Tropical forest covers fifty percent of Panamá. Mangrove swamps line the coasts, and the interior has mountains, the tallest of which is Volcan Barú at 11,4oo feet. Aside from tropical plants like palm, mangrove, banyan/fig, banana, papaya, and breadfruit, the mountains have deciduous trees like oak and elm, many varieties of epiphyte, fern, and moss. Animals you might find in Panamá include pumas, jaguars, tapirs, anteaters, agoutis (and other large rodents), coatis, peccaries, armadillos, sloths, spider monkeys, howler monkeys, and capuchins, poison dart frogs, boa constrictors, and tropical birds like the three-wattled bellbirds, quetzals, toucans, parrots, hummingbirds, woodpeckers, and sea birds like tropicbirds and frigates.