We spent an afternoon driving to Santa Elena, a small tourist town in the mountainous region of the Monteverde Cloud Forest, about halfway along the route between San Juanillo and San Jose. The house we rented had been built 65 years ago, but was now part of the Curicancha Nature Reserve. It was built of wood, and had a stone fireplace and huge picture windows looking out into the forest. We arrived late in the afternoon, and had time only to settle in and relax in our new place and make a plan of attack for the next day. 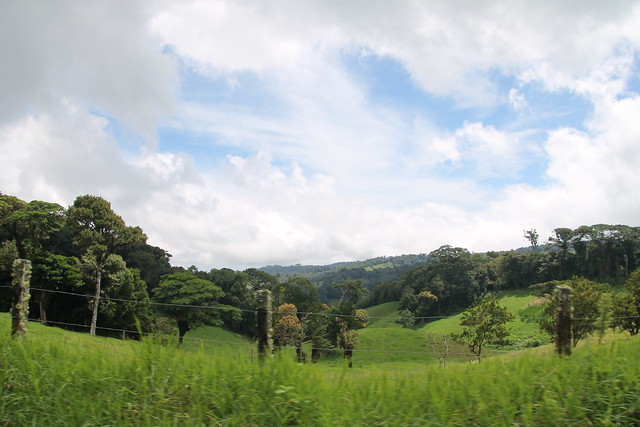 We had one full day with which to explore the area. Over breakfast the next morning, we tried to decide what exactly we wanted to do. On the way in, for example, we had seen signs advertising “Treetop Climbing.” This sounded fun and exotic, so we looked it up. Turns out, you had to pay 50 bucks per-person to climb a 130-foot-tall ficus tree with a hollow inside. Of course, there was also a 12-year age limit, supervision, and safety equipment. It still looked cool, but further research revealed a grove of DIY climbing trees that were a lot closer and could be used at one’s own risk at a 100% discount. Mom also found a horseback riding tour place, and a guided night-hike. Dad stayed at the house to work, so Mom and all us kids piled into the car to look for a tree.

It was close by, and not hard to find at all. We parked by the road, and followed a trail into the woods. We passed several other large and worthy trees before we came to the best one. It was very large and impressive, with two trunks that joined about 50 feet up, and then rose together before branching out at about 70 feet. It looked like something you’d find on Dagobah. 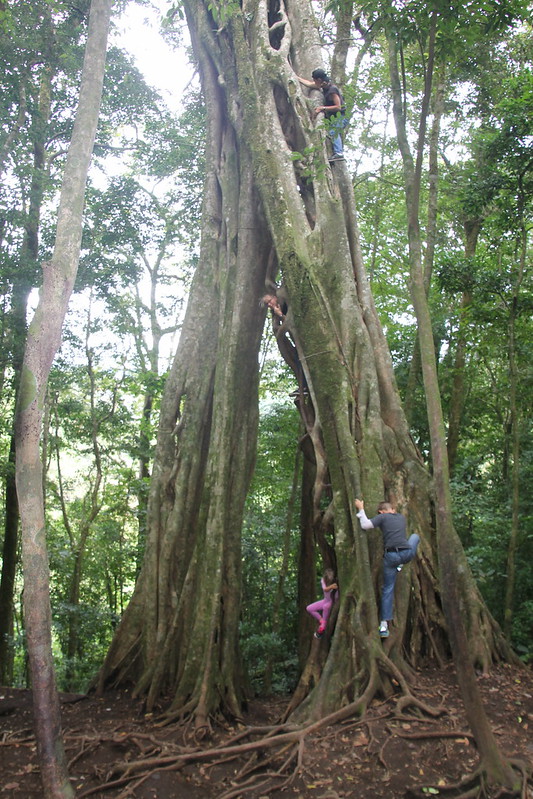 A strangler fig (in the ficus family, similar to a banyan tree) is not exactly a parasite, but it acts like one. A bird eats a fig and lands on the branch of a different kind of tree. The bird deposits the seed. The seed sprouts in the canopy of said tree, and begins to put down roots. The ficus grows up and around the host, using it for support, stealing moisture and nutrients from the soil and hogging sunlight, until the host is completely “strangled,” and dies. It then begins to rot away, but by then, the ficus is too tall and strong to notice a gaping cavity right through its middle.

On this particular tree, the main trunk was tilted at a 30-degree angle, and the cavity where the host tree had rotted away was only partially enclosed, with rib-like strands of wood forming a ladder on the inside slope. Climbing up was childishly easy, but very cool. It was like climbing up the spinal column of a brontosaurus. The view from the top was excellent, wherever there was a gap in the branches. I would have tried to climb out on a limb, but at the last moment, I happened to notice that I was seventy feet off the ground, and decided against it. 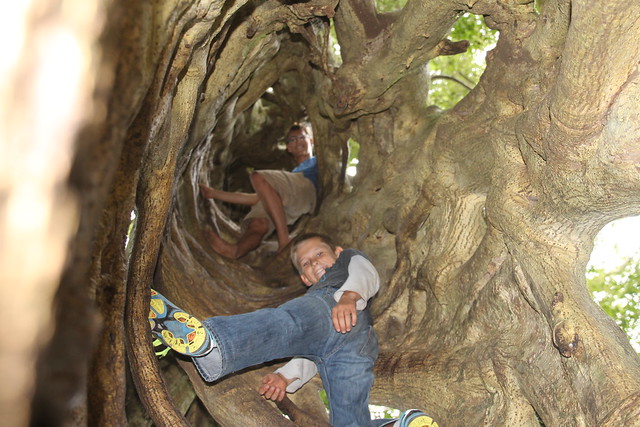 We descended and had a snack, then drove to the Bat Jungle, a sort of live bat museum. There was a room curtained off from sunlight which was filled with trees, bananas, and dishes of fruit, and where the cycle of day and night had been reversed so that guests could see the bats when they were active. It was late evening in the bat room when we arrived at mid-morning, and the bats were flapping around behind the glass, or hanging upside down, some of them nibbling chunks of papaya or mango. The museum houses mostly frugivores, as insectivores would have required a prohibitive number of buckets of live insects for food. The bloodsucking vampire bats were also not included, for obvious reasons. We are no strangers to bats, but it was still interesting to see them up close, especially the nectivorous “humming-bat” which uses its ridiculously long tongue to drink from flowers, or hummingbird feeders, in this case.

We returned to the house and ate lunch. The girls went out horseback riding, while Aaron, Sam, and I played a game of Monopoly. When they came back, we had an early dinner and got ready to go on a night hike. We drove up to the main entrance of the Curicancha Nature Reserve, and paid the entrance fee. Dad had to go back to the house to get his tennis shoes. When he returned, the guide handed out flashlights, and we set out. It was 6:30, and the sun was only just setting, but under the trees it soon grew dark. Most animals in the jungle are only nocturnal, and mainly live in the canopy. The guide said that we might not see much, and I believed it would be a miracle if we saw anything at all. And so, we trudged off into the dark and gloomy forest, never to return (for a few hours, anyway).

It was a bit creepy, walking under the dark trees, with the sounds of frogs and insects all around. We didn’t see any kinkajous or arboreal porcupines (darn!), but we did see a woodpecker-like bird with which the guide seemed most impressed. There were also many spiders. They were mostly wolf spiders, but the guide did know where to find a Red-kneed Tarantula, and I saw a second one further along the trail. Oh yeah, and did I mention the fluorescent scorpions? Scorpions glow an eerie green under a black light, and the guide showed us a whole tree-full. 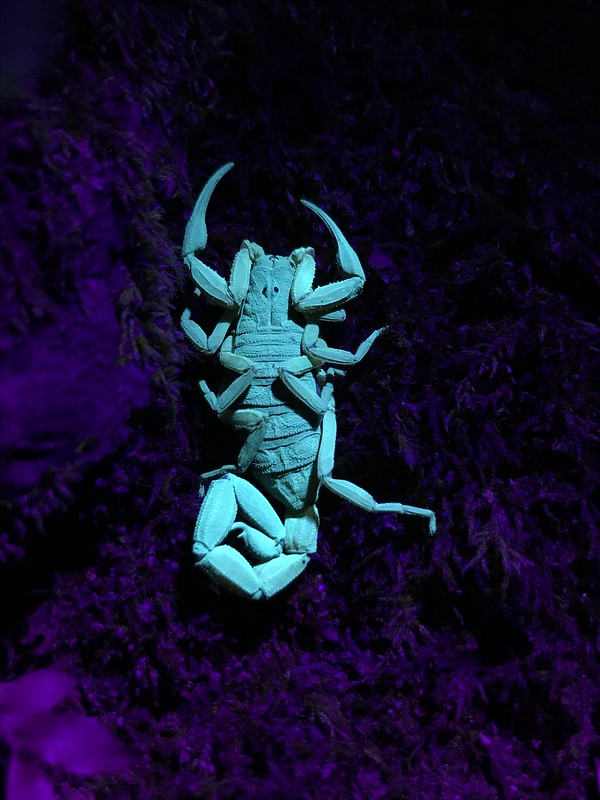 Once, while stopped at a frog-filled pond, we saw rabbit. It quickly moved off, and after a short discussion on the evils of global warming, so did we. We arrived back at the parking lot at about nine, with some of the smaller family members dragging their feet. We thanked the guide, turned in our flashlights, and went back to the house.

The next morning, we got up late, ate breakfast, washed the car, packed up, mooched around while the slow packers finished, loaded up the car, double-checked the house, actually got in the car, and left Monteverde. We then proceeded to become very lost. We eventually found our way back to San Jose, and we dropped mom and the car off at the car rental place while we went to check into the hotel. At the check-in desk, the receptionist said that, due to the gigantic futbol (soccer) match between Costa Rica and Mexico, all the rooms were full. Well, almost full. The presidential suite on the tenth floor was free, and she was so sorry, and would we mind? We shrugged, and said that it would be alright. She even gave us a complimentary bottle of water. We coolly handed our luggage off to the bellhop, and then sprinted for the elevators, grinning like maniacs. We left Aaron behind to receive Mom, and got settled in our posh new rooms.

After dropping my bag off, I went back down to wait with Aaron, and plan the bamboozlement of Mom. We had been scheming together for about twenty minutes, how we would deliver the bad news that the hotel had overbooked and had to cram all seven of us into one room (only to surprise her when we entered our suite), when Dad came down, and sent us up. Mom was late. Very late. Dad left us at the room, and went to wait for her at the rental car office. They eventually showed up at the room as the sun was setting, and Mom seemed inordinately glad to see us.

It turned out that at the car rental office, she had been informed that we would be charged two hundred dollars for leaving the gas tank partially empty (due to the difficulty of finding an easily-accessible gas station on our way back to San Jose) and been advised to “go around the corner” to the gas station to fill up. Of course, the roads were clogged with traffic, police barricades, and crowds of face-painted, flag-waving fans (futbol match, remember!), and she had gotten hopelessly lost trying to find her way back in rush-hour traffic. No experience of a new country would be complete without having to ask strangers for help in broken Spanish! 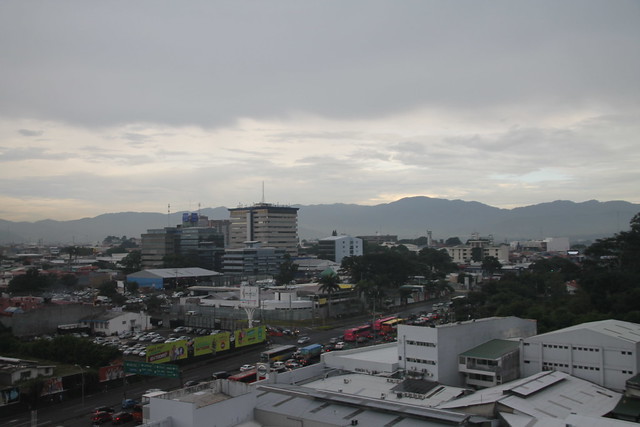 We celebrated our successful trip by dressing up and going to dinner at the Japanese restaurant in the hotel, and returned to our luxurious rooms to get some sleep. 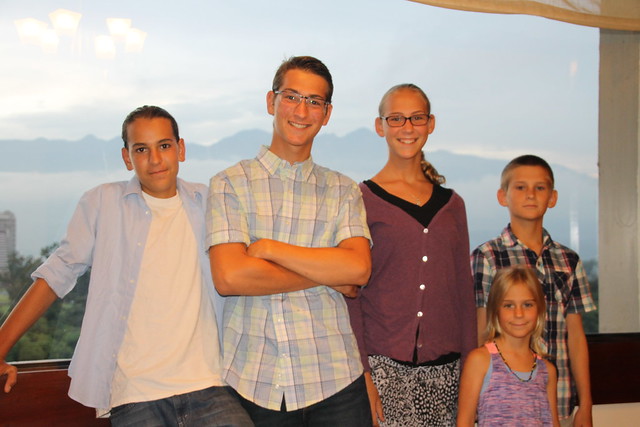 We got up at five for breakfast, the shuttle arrived at six, and off we went. I spent most of the ride back to Panama writing on the computer or reading my book. We had no problems at the border crossing (since we had purchased completely-unnecessary, refundable airplane tickets for flights to our home country). We arrived at Almirante, took the boat to Bocas, then hired a taxi to take us to the marina, arriving at the boat by late afternoon.

Our road trip was a great vacation, but it was also a learning experience and a chance to see another part of Central America, one we were not planning to visit by boat. What we saw of Costa Rica was very different from what we’ve seen of Panama. While still a third-world country, it seems more developed than Panama. Costa Rica realized a few decades ago that their natural beauty was a resource to be exploited. As a result, their eco-tourism industry blossomed, they capitalized on Nature, and it became a very popular vacation destination.

My conclusion: Costa Rica is very touristy. This is both a blessing and a curse. One the one hand, tourism means that natural areas are preserved and that activities are more convenient, organized, and established. But on the other hand, everything is more expensive, and feels less authentic. The locals are used to gringos, and are more likely to speak English, and tourist installations have somewhat marred the otherwise stunning wilderness. Panama, on the other hand, retains is wildness, but lacks a sense of appreciation and preservation of what the country has.