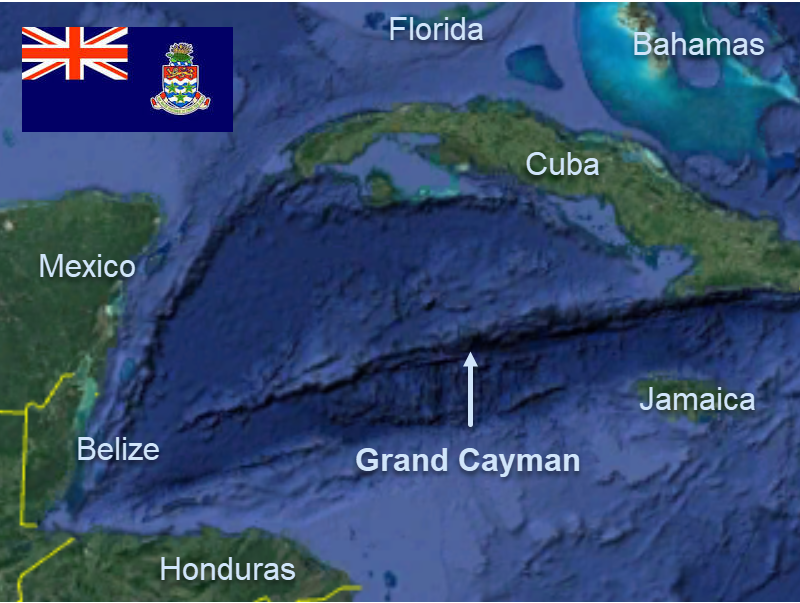 People/Customs: The population is about 61,000.  At the beginning of the 19th century, the Cayman Islands had a population of only 900 people, most of which were slaves. Today, there are still many descendants of those slaves, as well as an international community brought here by the banking and tourism industries.

Language: The official language is English.

Climate: There is a dry season (winter/spring) and a wet season (summer/fall) and is in the hurricane belt (hurricane season is June 1 to November 30). Temperatures average in the mid-80s (Fahrenheit) all year.

Government: The Cayman Islands have a Governor appointed by Great Britain and a local government of elected lawmakers. They are a British Overseas Territory under the rule of the Crown.

Currency: The currency is the CI Dollar, about 20 cents more than a U.S. Dollar.

Art/Music/Culture: The Cayman culture is always changing because of the influx of people from all around the world, however, one thing remains constant: everyone spends time in and around the water. On Easter weekend it’s traditional to camp on the beach, on November 8th the Caymanians celebrate Pirates’ Week to commemorate the pirates in their history, and there are many fishing tournaments throughout the year. On the Island there are Baptist, Catholic, Church of God, Presbyterian and Seventh-Day Adventist churches. Everything is closed on Sunday in observance of the Sabbath. Local artisans carve jewelry out of a special stone called Caymanite, which is only found in the Cayman Islands. The music has both African and European roots, with heavy influence from Jamaica and Cuba.

The Cayman Islands were found by Christopher Columbus in 1503 on his way to Hispaniola from Panama. His ships were blown off course and landed in the Cayman Islands. For centuries, the Cayman Islands were used as a supply-stop for Spanish sailors, explorers, and English privateers (and other pirates), looking for fresh water and turtle meat. The islands went through many name changes, but finally came to be known for the crocodiles which lived there, called “caymanas” by the Caribs. The Cayman Islands were not largely inhabited until the 17th   century, when they came under British control. In 1655, Jamaica was taken from the Spanish by Oliver Cromwell’s army, but the Caymans were not officially British until a treaty was signed in 1670. Slaves were imported and settlements thrived. In the 1700s, Sir Henry Morgan, Blackbeard, and other pirates are said to have buried Spanish gold on the islands, but it has not been found.

By the beginning of the 19th century, sailors started to venture to Jamaica for trading in Cayman-built ships. After the slaves were freed by the English in 1834, they settled in Grand Cayman and fished and turtled for a living. For the next one hundred years the islands stayed relatively isolated, though annexed to Jamaica. By the 20th century, the Cayman Islands were mostly settled, and the first cruise ship came to Grand Cayman in 1937, the same year the first booklet for tourists was published. In the 1950s and 60s, the first major hotels, resorts, and an airport were built, and the islands became known as a diving and beach destination. Jamaica became independent in 1962, but the Cayman Islands decided to remain a Crown Colony.

Throughout Cayman’s history, the islands have experienced many tropical storms, but on September 11, 2004, when hurricane Ivan hit the Cayman Islands, it was devastating. The winds gusted up to 200 mph and created a storm surge of 30 feet. Much of Grand Cayman was submerged, but Cayman Brac and Little Cayman escaped with little damage. The islands have recovered, and they are still known as an international banking center and a beautiful vacation destination.

The Cayman Islands are made of coral limestone, part of the Cayman ridge at the edge of the Cayman trench, located in the northwest Caribbean just south of Cuba. Cayman also has two sister islands, Little Cayman and Cayman Brac, both of which are made of coral and are mostly flat other than Cayman Brac’s east bluff which rises to 141 feet. The total land area is about 100 square miles. Plants on the island include tropical hardwoods, fruit trees, orchids, thatch palms, coconut palms, casuarina pines, tropical flowers, and mangroves. Blue iguanas and the Grand Cayman parrots are indigenous to the islands. They also have green iguanas, sea turtles, tropical fish, and sting rays. Despite the name of the islands, the caimans that once lived here were hunted to extinction.

Swim with stingrays at Stingray Ciity, dive the Kittiwake wreck, go horseback riding on the beach,  skate at the Black Pearl (the largest skate park in the Western Hemisphere), go to Star Fish Beach or Seven Mile Beach, hike the Mastic Trail, walk around the Queen Elizabeth II Botanical Garden and see the blue iguanas, snorkel with turtles at the Cayman Turtle Center, go deep-sea fishing, and take a night kayak tour in bioluminescent bays.

More Information about the Cayman Islands can be found at https://www.cayman.com.ky