Editor’s Note: After nine months in Guatemala, Take Two is preparing to head north toward Mexico–likely Sam’s last geography report–as we complete our three-year, 5000+ nautical mile circle of the Caribbean this spring. 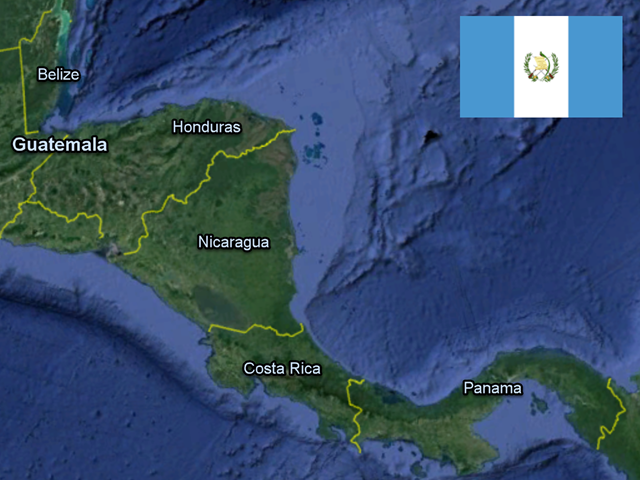 People/Customs: Guatemala has a population of more than 16.5 million, (as of 2016), made up of many different people groups about 41% Ladino (mestizo), 11% K’iche, 8.3% Q’eqchi, 7.8% Kaqchike and a mixture of other Mayan and indigenous groups. Guatemala’s religious makeup is mostly Evangelical Christian and Roman Catholic, but there is also a Jewish population, as well as small groups of Muslims and Buddhists.

Language: the official Language is Spanish, but several Mayan dialects are also spoken (Q’eqchi for example). English is taught in schools, but not commonly spoken.

Climate: Guatemala is bordered by two oceans (the Pacific and the Atlantic) making it susceptible to hurricanes, volcanos and floods. Temperatures range from near-freezing at the highest altitudes, to a humid 90° on the Caribbean coast. Guatemala has a dry season and a wet season (rain depends on altitude and region) and is in the hurricane zone, though Rio Dulce, which runs inland, is considered safe from hurricanes.

Government: Guatemala is a constitutional democratic republic with a president.

Currency: the Quetzal (1 dollar= about 7.5 Quetzals)

Art/Music/Culture: the music in Guatemala was influenced by the Spanish settlers, the African slaves, and the Mayan natives. Some of the main musical types are nueva cancion, salsa and punta. Mayan musical instruments included drums, horns, and flutes, and a wooden xylophone called a marimba is still popular today. Carvings from wood, stone, and jade are common, and the markets in the mountain regions which sell colorfully-dyed and woven cloth are famous.

As in Belize, the Mayan civilization plays a large part in Guatemala’s history. The Mayans were in Guatemala thousands of years before the Spanish conquered their land. It was an advanced civilization with a written language and a complex religion consisting of many different gods and spirits. The Mayans were expert builders and possessed advanced knowledge of mathematics and astronomy. They also believed in an afterlife where humans who were sacrificed continued the battle of good and evil. When the Spanish came to Guatemala in 1519, they tried to convert the Mayans to Christianity, but only succeeded in a limited way. As the Spanish settled in Guatemala, the Mayans were either killed, enslaved, or forced to flee to remote places. Many fought back, and many died of diseases brought from Europe. Since no gold or silver was found in Guatemala, the land and its people—as slave laborers—were exploited for tobacco, chicle, cacao, cotton, indigo, and cattle. Somehow, despite Spain’s three centuries of brutal rule, and continuing conflict with the Guatemalan government, their culture has survived until the present day.

The first capital, Villa de Santiago de Caballeros was founded in 1527 (present-day Antigua). After flooding and earthquakes destroyed it in 1773, it was moved to its present location (Guatemala City). During the colonial period, power was concentrated with Spanish landholders and the Catholic church, and the subjugation and persecution of the Mayan peoples that began in this period continued into this century.

In 1821, several Central American regions, including Guatemala, claimed their independence from Spain and formed a loose federation of states. In 1838, the Honduran and Guatemalan leaders of a liberal party invaded Guatemala, took over the government, and executed the head of state, beginning more than a century of violence and political strife as liberal and conservative factions fought for government control.  After warring with neighbor states, Guatemala declared its independence as a nation in 1847, though border disputes persisted into this century.

Coffee was brought to Guatemala by Jesuit missionaries in the mid-1700’s as a decorative plant but was not grown as an agricultural product until the mid-1800’s when the natural dye companies went out of business due to the invention of synthetic dyes. There are eight distinct coffee growing regions in Guatemala today and its coffee is exported all over the world.

In 1904, the United Fruit Company entered the scene, and eventually bought about 40 percent of Guatemala’s land, cultivating 14,000 acres of land with bananas and other tropical fruit, and building railways, roads, ports, and a fleet of ships. The United Fruit Company had a hand in many other business and political ventures. (The fruit companies still have a lot of economic and political power.)

Jorge Ubico was a general in the Guatemalan army who was elected president in 1931 (in an election with no other candidates) during the Great Depression after José María Reina Andrade, Manuel María Orellana, Baudilio Palma, and Lazaro Chacón had all been deposed for separate reasons in the previous 2 years. Ubico was known by his efficiency and cruelty; he reinforced the police and military greatly and instated forced and slave labor. He was forced to resign 1944 after a series of violent uprisings.

A new constitution was made which allowed all adults the right to vote and limited presidents to serving one term in office. Ubico’s successor lasted only one year. In 1945, Juan José Arévalo was elected and served a six-year term, survived 25 coup attempts, and established a social security system and health reforms. After Arévalo, a military leader, Jacobo Arbenz Guzmán was elected and made socialist reforms. Because he was friendly to the communist party and passed agrarian reforms which redistributed land to Mayan peasants, he lost the support of the United Fruit Company and incited the United States to get involved. Guzmán stepped down in 1953 before the CIA could mount an attack to depose him, and what followed was thirty years of economic and political troubles during which the constitution was revoked and the Mayans lost land holdings and civil rights. President Armas, supported by the United States, was shot by his own body guard in 1957.

After much turmoil, General Fuentes took power, but was later overthrown when the U.S., fearing a communist revolution, backed a military coup and a new leader. The next several years saw constant change and conflict—with the military in charge of the government and guerrilla fighters representing the people involved in a bitter, decades-long civil war.

Initially, the two sides were the FAR (Rebel Armed Forces) and PGT (Guatemalan Labor Party) against the MLN (National Liberation Movement), a right-wing organization aligned with the military and blamed for using political assassinations and death squads to silence opposition. Later, as the violence escalated, URNG (Guatemalan National Revolution Unity) and the EGP (the Guatemalan Army of the Poor), whose motto was “Long live the poor, death to the rich,” opposed the ESA (Secret Anti-Communist Army), FNO (National Opposition Front) and the government-sponsored PACs (Civilian Self-Defense Patrols). People were forced to either serve the government or join the guerrillas.

Horror stories and human rights abuses were common during the war. In one case, villagers who came to a town meeting to resolve a land dispute (over a parcel near fruit shipping lanes owned by the president) were met by soldiers who shot over a hundred men, women, and children and buried them in mass graves that the army had dug the day before.

The elections of 1990 were the first peaceful transfer of a civilian democratic government, and peace accords were signed in 1996. The thirty-plus year civil war cost hundreds of thousands of people their lives and land and created over a million refugees. Tens of thousands went “missing” (like school children abducted to serve in the army) and their whereabouts were never discovered. Some of those responsible (like Rios Montt, president in the early 80’s) were later charged for what amounted to genocide and “crimes against humanity.” Political turmoil, government corruption, and economic inequality are still common in Guatemala, where there is a huge gap between rich and poor, and the military protects the government instead of the people. Peace is tenuous, and there is always the threat of impending conflict. Despite that fact, Guatemala is a beautiful country with fruitful land, kind and friendly people, and a rich pre-Colombian history.

Guatemala is made up of volcanic mountains, cloud forests, rain forests, coastal plains, wetlands, and mangrove islands. On land you can find many different kinds of wild cat (like jaguars, panthers and mountain lions), tapirs, monkeys, coati, iguanas, snakes (including the infamous fer-de-lance), as well as domesticated animals like cows, horses, goats, pigs and chickens. In the air you can find many different species of macaw and parrot, toucans, oropendolas, hummingbirds, hawks, and vultures, as well as seabirds like pelicans, cormorants, sea gulls, and frigate birds. And In the water you can find several spices of freshwater fish like snook and white-fish, and on the coast, reef fish and sharks. There are pine forests, tropical forests, palm trees (like coconut palms), fruit trees like mango and papaya, ferns, air plants and hundreds of species of orchid.

Go zip-lining, kayaking, wake-boarding, hiking, swimming in water-falls and hot-springs near Rio Dulce and Lake Isabal, climb a volcano, visit coffee plantations, or find jade and fabrics in the markets of Antigua, visit the Mayan ruins of Tikal or Yax’ha in the Peten region, or visit the villages along the shores of Lake Atitlan.