It only took two days before “the plan” went into the wastebasket.

The bridgedeck is the span between our hulls.  It is a sandwich construction, with heavy beams running between the hulls and smaller pieces fore-and-aft to make a grid, and layers of plywood on the top and bottom.  We walk on it above, and the waves hammer it below.  Structurally, aside from the walking part, its job is to make sure the boat remains square, and that one hull doesn’t outrun the other one.

The paint on the underside of it has always been a problem, and with the repairs we had to do, I had half a mind to take it all down and repaint it.  Half a mind.  Notice I didn’t even mention this in the Day One post.

But on closer inspection, we found unsettling signs of moisture.  Moisture in boats is generally a bad thing, but especially wood boats prone to rot.  Like ours.  We put a moisture meter on it and found high concentrations of moisture in several different areas.  The paint was going to have to come off.

While stripping the hulls finished ahead of schedule, Eco Strip couldn’t do the bridgedeck.  There’s no fiberglass there, just wood and paint, and they were afraid of tearing up the wood.  So we’d have to do it the hard way. 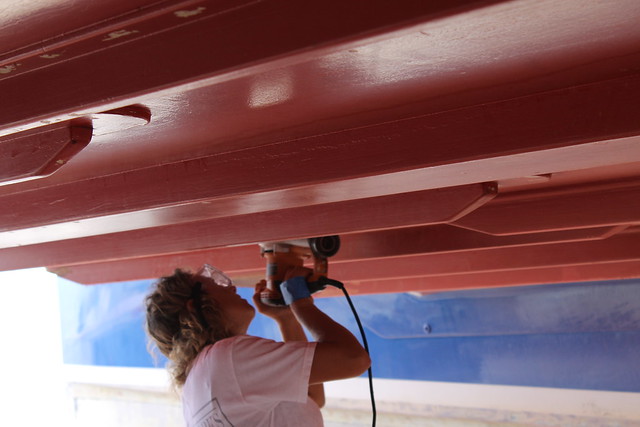 Yes, that’s a girl.  And yes, I’m slightly uncomfortable with that.  But she works like a horse.

It’s too early to tell what this means for our overall timeline.  After we’re finished sanding, we have to find the cause of the moisture, fix that, then repair the wood, then seal it all up and paint it.

I’m taking suggestions for color.  I’m bored with the red and I’m thinking of something a little more fun.  I always joke that nobody but a helicopter pilot will ever see it anyway.  Maybe chartreuse?

So it’s a little bit of a bummer, but we expect the unexpected.  On the plus side, we’re going to fix the shit out of this.  Cuz that’s how we roll.