The main event for me today was the survey.  This is where a guy comes and inspects the boat to see that it is not likely to sink or burn, and is valued correctly.  Basically making sure it is a good risk from an insurance perspective.  From my perspective, it’s a trial.  This guy is coming to judge what I’ve done over the last four plus years.

It went pretty well.  I was concerned how he would react seeing the obvious moisture in the bridgedeck, but he was cool about it.  He spent about an hour tapping the boat with his phenolic hammer and pronounced it all sound.  His meter did not detect any undue moisture in the hulls, but the rudders pegged it.  He didn’t bother with the bridgedeck.  We were so distracted by the bridgedeck, we never tested the rudders.  Apparently, they’re full of water.  Which isn’t ideal, but it isn’t terrible either.  He said most rudders are.

He said that moisture itself is not a problem.  It’s only an indicator of a future problem.  As long as the hammer says the boat is solid, there’s no current problem.  Even the bridgedeck passed the hammer test.  Obviously, we’re concerned about future problems and are going to great lengths to fix the bridgedeck.  What will we do about the rudders?  Probably nothing.

The difference is that the rudders are full of salt water, which does not rot wood the same way fresh water does.  They’re also not dripping, which means whatever water is in there got in from the top.  Fixing it would require undoing the whole steering system and dropping the rudders.  Been there, done that.  No thank you.  There is a risk that the welds holding the rudder’s internal webbing to the post will break, but that risk wouldn’t go away even if we did rebuild them.

The surveyor was full of helpful anecdotes.  He said a catamaran came into that very boatyard about a year ago for a survey, and when they hauled the boat out of the water it only had one rudder.  The skipper was completely oblivious.

So after poring over the boat for four hours, the surveyor found two things I’d done wrong.  First, our propane stove does not have thermocouples to shut off the gas if the flame blows out.  I had no idea such things existed, and I’m still not sure if I can retrofit them.  Second, the galley outlets by the sink are not GFCI.  Yes, I suppose I should have known better there.  Interestingly, he had a tester for the GFCI outlets we do have, and we discovered they don’t work on our inverters.  Shore power, yes.  Generator, yes.  Inverters, no.

He found a burned-out navigation light and a smoke alarm with a dead battery.  I fixed both in his presence and he was satisfied.  He was not happy that my batteries are not strapped down.  Granted, this would be a legitimate concern on a monomaran that rolls all over the place.   But our boat would have to be completely upside down to budge them an inch.  I invited him to try.  They weigh 175 pounds apiece.

All-in-all, I consider the survey a huge success.

On the bridgedeck front, we have identified at least three separate sources for the moisture.  One is the cockpit drains, the bottoms of which are flush with the bottom of the bridgedeck.  The water has a tendency to spread out along the bottom of the bridgedeck rather than pour straight down.  Extending the drain pipes a fraction of an inch will help immensely.  We’ve already proven this during an afternoon thunderstorm.  Second are the fasteners (screws) which secure the bottom of the bridgedeck to the grid (in addition to copious amounts of epoxy).  However, the fasteners themselves were not epoxied.  They were screwed into raw wood, a filler was put over the hole, and then paint.  Not good enough.  Moisture permeated the paint and the filler to attack the wood through the screw hole.  The good news is that the moisture only appears to be in the surface layer of the plywood.  With the paint removed, it is drying before our eyes. 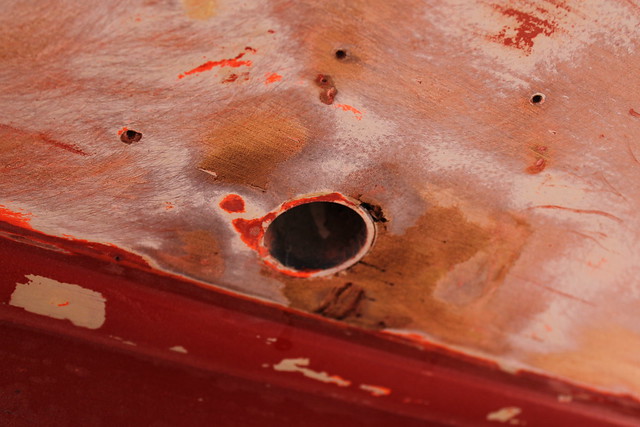 The third source is more elusive.  A pattern of wetness is emerging that roughly coincides with where we have conduit running through the bridgedeck.  Conduit carrying fresh water hoses.  “Aha!” you think, “A leak!”  Not so fast.  One of our intrepid technicians inadvertently tasted the water when he drilled into a flooded cell and received a deluge in the face.  He declared it salty, and quite foul, many times actually, and loudly.  Hmm, we must ponder.  Meanwhile, the sanding continues.