The generator room has received its third and final coat of paint.  When the crane comes next week, we’ll be able to put the generator straight into the boat. 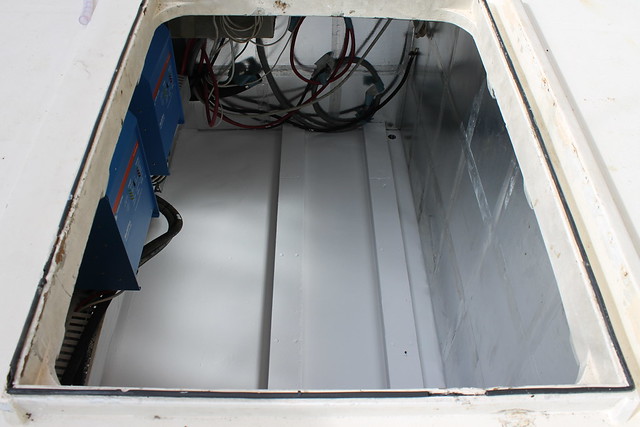 Unfortunately, it will be far from ready to run.  Even though we had a generator in the same spot before, almost everything is being replaced.
New fuel lines will be run — a supply and return hose for each of the port and starboard tanks.  That’s 200 feet of fuel hose.  The old ones are kind of sketchy looking and there are some tees that I want to get rid of.
The supply hoses will run to a new fuel transfer system with selection valves for three inlet ports (the third port being a loose hose for drawing from a jug).  Next is a Racor turbine fuel filter and water separator.  Then comes an electric fuel pump that runs on a twist-the-knob timer, or when the generator is in the “glow” phase of its start sequence.  After the pump are valves to send the fuel through the generator for normal operation, or bypass the generator for fuel transfer/polishing.  Finally, there will be three outlet ports – one for return hoses to each side of the boat, and one for a jug.
We built the first version of this arrangement for the old generator, and it saved our bacon on a couple occasions.  Think of the applications:  you run out of fuel and need to run your generator from a jug;  you have some fuel of questionable quality in a jug and you want to run it through a Racor before putting it in your tank;  you have more fuel in one tank than another and want to balance it out;  you have bad fuel in one tank and need to clean it;  you want to just run a portion of your fuel through a filter just on general principle, even if it goes back to the same tank;  you need some fuel from your tanks for cleaning, sharing, topping up filters, etc.
New raw water hose will be run.  The old generator had 35 feet of 1” hose from thru-hull to raw water pump.  That’s a lot of hose, and it needed an electric lift pump to help it out.  I think we’re going to move the thru-hull to reduce the hose run to 20 feet, but it really can’t get any closer.  The generator is in the bridgedeck out over the water.  We’re still undecided about the size of the hose, or whether a lift pump will be needed.  We’d like to get rid of it.
New exhaust will be designed.  We used to shoot our wet exhaust out the front of our bridgedeck, but Ben said that was unladylike.  It was also kind of splashy and leaves a rust stain around the exhaust port.  Instead, the new generator will use a gas/water separator and both will be separately routed down through the bridgedeck.  The gas will be invisible of course, and without the gas pushing it, the water will be much more discreet.  The exhaust port in the front will be closed up.
The start battery will move from inside the salon into the generator room.  We’re adopting the same theory as I described for the engines yesterday.  The cross-charger that the generator start battery currently uses will go away, and instead will be charged by the generator’s alternator.  All three start batteries will have switches that allow them to be combined to compensate for a bad battery or alternator.
Of all this work, only installing the thru-hull and closing up the old exhaust port are on the list to do while we’re in the yard.  The rest can wait if it has to. 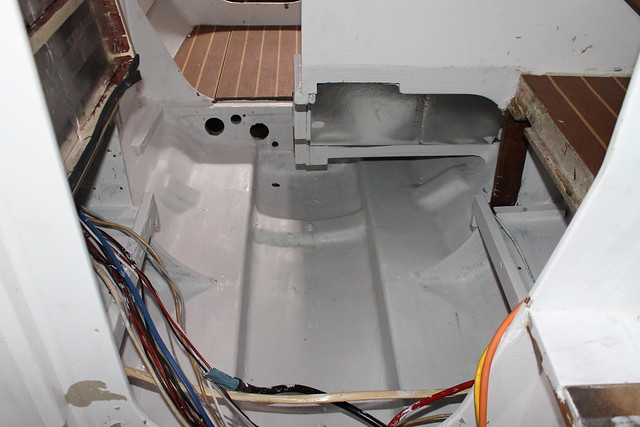