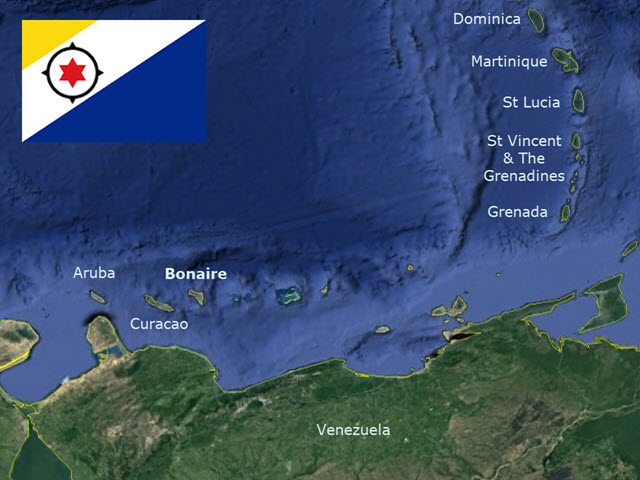 Capital: Kralendijk
People/Customs: The population of Bonaire comes from a mixture of European and South American people, and their culture reflects this. They also have a lot of English-speaking tourists and expatriates. Holidays include New Year’s Day, Good Friday, Easter Sunday, Easter Monday, Labour Day, Ascension Day, Whit Sunday, Emancipation Day, Sinterklaas’ birthday (December 5-6) Christmas Day, Boxing Day.
Language: Dutch is the official language but English and Spanish are commonly spoken. The locals use a dialect called Papiamento, a mixture of Dutch, English, French, and Spanish.
Climate: Average yearly temperature is 82°F. Average yearly rainfall is less than 22”, falling mostly between October and January.
Food/Farming: Salt is one of the main exports on Bonaire. The Cadushy cactus is edible and its juice is distilled to make alcohol. A kind of maize (corn) is grown in years with enough rainfall.
Government: Bonaire is a special municipality of the Netherlands since the dissolution of the Netherlands Antilles in 2010, and as such, has a mayor, alderman, and municipal council.
Currency: The US Dollar is used here to accommodate incoming tourists.
Art/Music/Culture: Colonists from Africa, Portugal, Spain, England, and Holland have contributed to the culture, music, and poetry found on Bonaire.

In 1499 Amerigo Vespucci claimed Bonaire for Spain. In 1636 the Dutch took the island, and slaves were imported to work on the salt flats in the late 1600s. The Spanish, Dutch, and English fought over Bonaire but it was conquered by the Dutch in 1816. In 1834 slavery was abolished and the salt industry faltered while the newly freed people became accustomed to the new way of life. Many immigrated to Venezuela for jobs while the island settled into its stride. In the 20th century, telephones connected Bonaire to the outside world and cars and trucks made transportation and delivery possible. Oil refineries opened on Aruba, and gave people from Bonaire better paying jobs closer to family and home. The first airport was built on the island while American troops were stationed there during World War II. After the war, tourism was brought to Bonaire and the island began to thrive. Aruba, Bonaire, Curaçao, Saba, Sint Eustatius, and Sint Maarten became the Netherlands Antilles in 1954, and in 2010 they became part of the Kingdom of the Netherlands, sometimes referred to as the Dutch Caribbean.

Bonaire is not volcanic, but has a coral limestone foundation, and there are several salt flats on the island. It is dry and rocky with desert scrub and cacti. Common trees seen here are Brazil Wood, Divi divi, and Mesquite Acacia. The Lora and Prikichi Parakeet can be seen here, and the wild flamingos like the salt pans. The Yellow-shouldered Amazon parrot is an endangered indigenous species. Underwater, the entire coastline is lined with coral reefs and has plentiful sea creatures, including tropical fish, turtles, and marine invertebrates.

Diving, snorkeling, kiteboarding, and windsurfing are popular water sports and you can also visit the wild flamingos and donkey colonies on the island. Washington Slagbaai National Park has miles of trails and includes Mount Branderis, the highest point on the island at 785 feet.