Here we have a sweet little expression that sounds so much nicer in French than English, and translates even better, as “Bad (or Sick) of Sea.” That about sums it up. It’s a subject you will not read much about in glossy cruising magazines, but a crucial one that must be addressed. 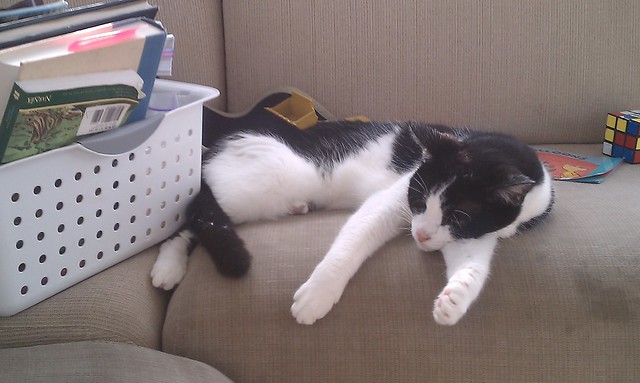 People assume that if we live on a boat, we all love boating and feel comfortable with the motion of boats. It’s simply not true. Jay—the captain, for heaven’s sake—has only to look at waves the wrong way to feel queasy. Our littlest, who has lived on the boat her whole life, gets sick almost every time we set sail. Sarah and Sam frequently feel sick, though Sam seems to get over his queasiness after a day or so. Aaron gets motion sick riding his skateboard on the half-pipe, so he’s pretty much hopeless on the boat. Before they left for the happy hunting grounds, even our cats got seasick. Eli was lucky enough to get the genes for my stomach-of-steel, meaning that it takes pretty severe conditions to make us feel ill. I can be on watch, sitting at the helm, reading or writing, in 6-8 foot ocean swells, in the dark. No problem. Eli can use his flight simulator to fly airplanes while we sail.

Once, Sam asked me if he could play video games, too, and I thought it might be a way to fill a few dull hours on a passage, but he ended up at the rail. Jay asked what he was doing and was incredulous that I would let him sit in front of a screen. It never occurred to me that it would cause a problem, since the seas (in my opinion) were relatively calm. That means I am not very sensitive to the conditions that cause 70% of our crew discomfort.  Of course, I am aware of their misery, and often get the lovely job of holding hair, cleaning up, and fetching water and towels.

Over the years, we have found many ways to deal with this recurring problem. At first, we tried natural remedies, like Sea Bands, which use the secrets of accu-pressure to alleviate suffering. Supposedly. We have tried ginger everything—ginger pills, ginger tea, ginger ale, ginger drops, ginger snaps, crystallized ginger, and ginger-based “queasy pops” (that looked and worked a lot like dum-dums). We have specially-blended essential oil drops (branded as Motionease) to place behind the ears. We have the Cuban fisherman remedy: Coke and Snickers.

And then we have some things that actually work. Despite our desire not to drug our children, their reluctance to put to sea and repeated requests to sell the boat made us rethink our position. On board we now have chewable children’s Dramamine, once-a-day chewable Bonine, Stugeron, and, for the desperate situation, Scopolamine patches (just for fun, look up the side effects on that one). Jay medicates preventatively, as do Aaron and Sarah. We can’t have the captain incapacitated. The two younger children can sometimes be coerced into taking the chewables, although they now associate that flavor with throwing up, so good luck on that one. They usually hang out with a bucket for a day or two and then get their sea legs the old fashioned way. And Eli and I, as the only vertical members of the crew, fetch and carry for the others.

Keep in mind we are on a catamaran. My galley is in the main cabin, with a 360° view of the horizon through the windows. We are not heeled over at all and we don’t “roll”, though the movement is often jerky as the “righting moment” of a catamaran is faster than that of a mono-hull. Some prefer the smoother motion of a deep-keeled, traditional boat, but even with my strong stomach, going down into the hulls to clean something up or dig out supplies has me feeling a bit green, so I can’t really imagine the whole mono-hull-cave experience.

Occasionally, when the conditions are right (usually when someone near me is sick), I can succumb to mal de mer. And what I can say about the experience is that the psychological component cannot be overstated. As long as I go outside and stare at the horizon and get some fresh air, I can overcome the initial queasiness, but if I have to go below for some reason, or if I’m trying to cook in rough seas and can’t step away, or if I’m doing a particularly nasty clean-up job, I begin to wish that someone had invented teleportation so that I could just “beam” off of the boat. It is then that I recognize the hardships that we have imposed on our family, and feel empathy for my children (read “mother guilt”).

We have been sailing as a family for more than ten years (before Take Two we had a little day-sailer in Tampa Bay), and our recent passage to Bonaire marks the first time that no one felt sick. It wasn’t a particularly calm passage—though we tend to pick our weather windows to minimize discomfort rather than for fast sailing—but we did have one night in an uncomfortable anchorage to prepare us, and between acclimation and medication, we seem to have struck the right balance. That does not mean, of course, that we are “cured,” since there is no cure for wind and waves, but we will enjoy that success and cross the next sea when we come to it.