We have a new friend in Panama, though he isn’t Panameño. Every afternoon when we finish our school and chores, we head over to the other side of the island (through the mangroves, over the hill with the “monkey crossing” sign, past the sloth tree) to go to Playa Tortuga and cool off and play in the waves. There are two guys who work there, raking the beach to keep it free of seaweed, serving Coco Locos to thirsty tourists, and acting as lifeguards to swimmers: Humberto and David. Humberto has been working for Red Frog for a long time, something like 9 years, but the other guy, David, is relatively new to the job. I discover all this in casual conversations in both Spanish and English.

David, as it turns out, is Venezuelan, working in Panama for a couple of years and sending money back to family while his home country is busy falling apart. He has a wife and two sons, brothers and sisters, aging parents—all of whom he helps by raking beaches in paradise. In our conversations, he helps me with my limited Spanish, and I help him with his limited English. He is surprised to learn that our family of seven lives on a boat, and I am surprised to discover that he is a medical doctor in Venezuela. He’s on-call for emergencies at Red Frog, but can’t afford the outlandish license fees to practice in Panama. I used to encounter this kind of thing when I taught elementary school in Atlanta. A refugee family would arrive in the neighborhood, and the dad would be working three jobs, dishwashing or construction or day-labor, and it would turn out he had been a college professor in his home country.

David, aside from having a great sense of humor, is a sort of Jack-of-all-trades, a “utilíto,” who can do just about anything. After his parents’ separation when he was a child, he basically raised himself, becoming completely independent by the age of 14. One of his many talents is Venezuelan cooking. On his day off, David often comes over to cook and share the meal with our family. One night, he teaches me how to make a Venezuelan empanada, which is made with corn masa rolled into a thick tortilla, folded around a filling (usually meat and cheese) and cooked slowly on a griddle. Eli and Sarah learn how to make hallacas–similar to tamales, but using banana leaves instead of corn husks, and including some very surprising ingredients. Sam is becoming our expert on arroz con coco–a delightful desert, slightly reminiscent of rice pudding. What follows is a recipe, of sorts, though I’m not sure you could repeat it at home. I’m not even sure we can repeat the experience without our Venezuelan chef! 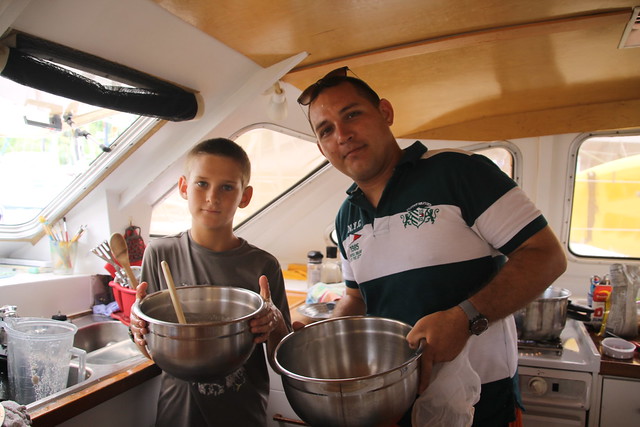 Making hallacas is an all-day, whole-family affair, a holiday meal often served at Christmas and New Year’s. The only thing comparable in the U.S. might be the preparation of turkey-and-trimmings at Thanksgiving. For this cooking class, David is the chef, and Eli the sous-chef. Sarah offers some assistance as well as making dessert (a coconut flan with lime-caramel sauce), but Aaron is out all day working at a neighboring marina, and Sam and Rachel have some new boat friends to play with so they stay out of the way. I take photographs and clean up after the cooks.

The day starts with a shopping trip in Bocas Town to buy supplies for two dozen hallacas: 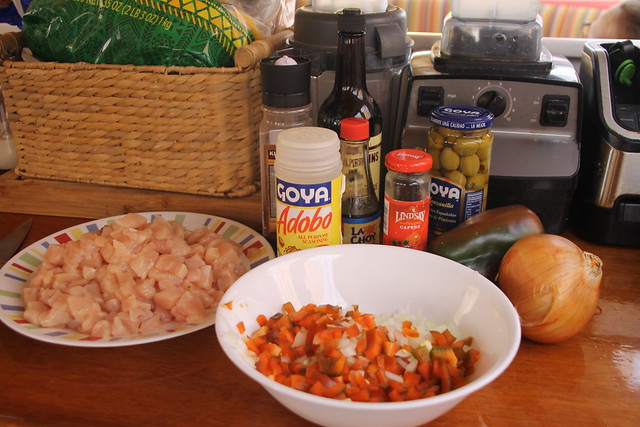 When we return home, the first step is to trim the stems off of, and wipe down, a dozen large banana leaves. Using a clean cloth and bowl of water, they clean both sides of each leaf. After they are dry, we fold them gently and set them aside for later. It is possible to buy prepared banana leaves, and David says they have been passed through fire so that they impart a different flavor, but since he couldn’t buy them here, fresh will do. 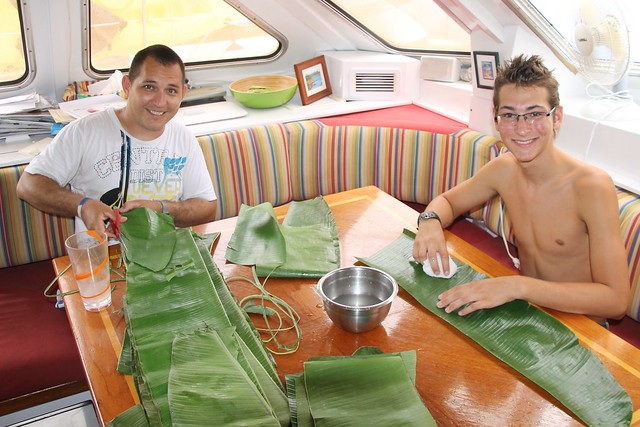 Now the frenzy begins. Eli and David trim the fat and bones off of the meat and begin to chop it into small bite-size pieces, keeping the chicken dices in a separate bowl, since they cook more quickly and are added at a different time. Sarah peels and chops garlic. Eli chops finely one of the onions and one of the peppers. David minces the green herbs.

The diced pork and beef are placed in a large pot over low heat and begin to cook in their own fat. The minced vegetables, garlic, and herbs are added. When the adobo, Worcestershire (a.k.a. salsa Inglesa), soy sauce, capers and green olives (drained and rinsed), and tomato paste are added, the smell it begins to generate is tantalizing. The top goes on the pot so the meat can stew in its own juices for about twenty minutes. Then the chicken is stirred in. After another twenty minutes, David tastes the mixture, adds salt and pepper, and declares it delicious. It stews a little longer until all the flavors have melded. After about an hour total cooking time, the heat is turned off and the top is placed on the pot. Time for the next step. 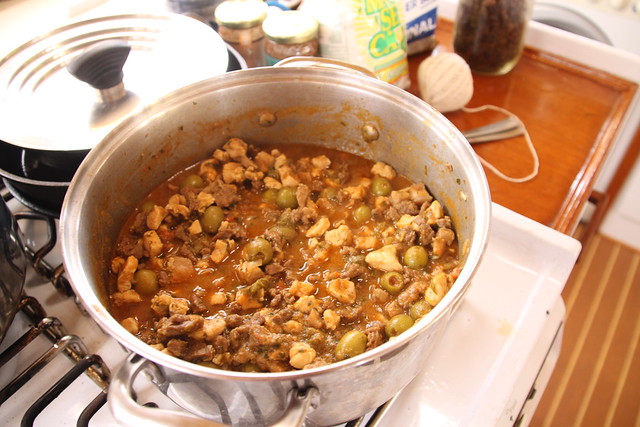 In another pot, we bring two quarts of water to boil. We add the potatoes and carrots, unpeeled and whole, and the eggs. After about 15 minutes, we will remove the eggs, test the root veggies with a fork, and continue to boil them until they are tender. Meanwhile, under David’s tutelage, Eli is thinly slicing the remaining onion and bell pepper. When the potatoes are done, they are peeled carefully under cold water. When cool to the touch, the potatoes, carrots, and eggs are also sliced thinly. At this point, I am wondering how all these things are going to come together. This recipe is like nothing in my repertoire.

David makes a masa with the fine yellow cornmeal. When I make tortillas, I add warm water to salted cornmeal, but when David makes a masa, he starts with cool, salted water and adds the cornmeal. I’m not sure about the science here, but his dough is softer and smoother than mine, and a little wetter than when I’m making tortillas. He adds a couple of tablespoons of olive oil, and continues to massage the dough until it forms a smooth, silky ball, adding cornmeal or water until the texture is just right (about like play-dough). 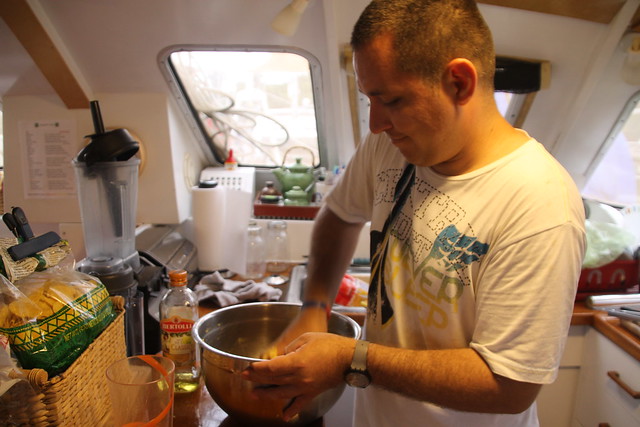 When the masa is ready, it’s time for assembly. At this point, all the ingredients are laid out on our salon table: banana leaves, a small bowl with water and oil, a large bowl of corn masa, a pot of meat, bowls of cooked and sliced carrots, potatoes, and eggs, sliced fresh onions and peppers, a bowl of raisins, and a ball of string. My largest pot, a 20-quart pressure cooker, is two-thirds full with water over medium heat. By the time it comes to a boil, the first hallacas will be ready to cook. 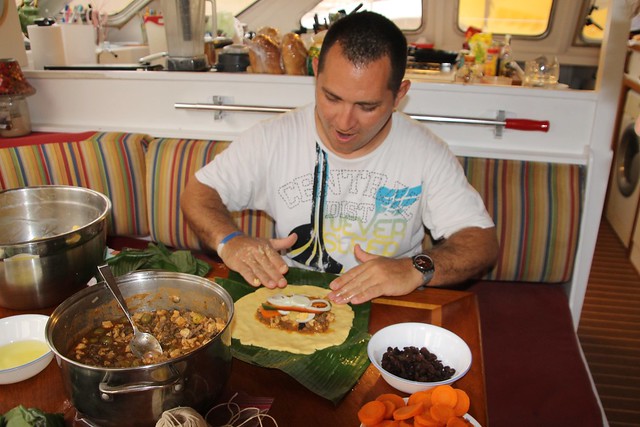 The magic begins like this: David tears a banana leave into squares, which he overlaps to make a larger rectangle. He dips his fingertips in the water-and-oil, and wets the surface of the leaves. He takes a handful of masa and rolls it into a ball, which he places in the center of the leaves. With oiled fingertips, he flattens the dough and presses the edges outward until it is a disk about 1/4 of an inch thick and eight inches across. He spoons some of the meat mixture into the center. On top he places a few disks of potato, carrot, and egg, and a few long, thin pieces of onion and pepper. He sprinkles on some raisins, then carefully begins to fold the whole thing into a tightly-closed packet. No recipe could explain how to do this—it’s the sort of thing that must be seen and done to be learned. He has a special way of tying it up with string which he is teaching to Eli. If we ever make this recipe on our own, we will probably have to watch a video to remind ourselves how to do it. 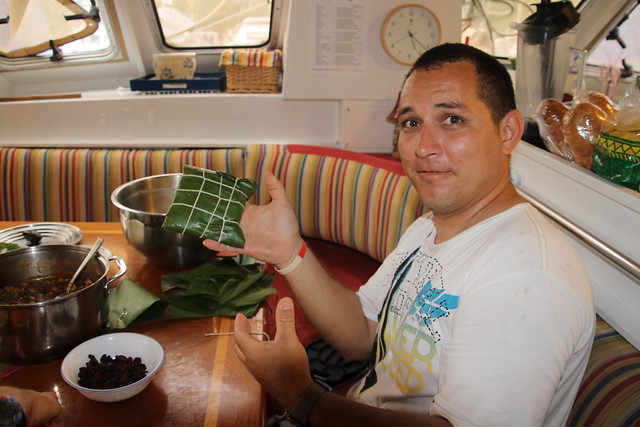 In the end, we have a perfectly-wrapped, soon-to-be-enjoyed gift. It is placed on a platter and the whole process is repeated. After about a dozen are done, they go into the boiling water for twenty to thirty minutes, doneness being determined by lifting the packet out of the water, and tapping on it until it sounds done (the same way empanadas are tested). While the first batch of hallacas are cooking, the second batch is in assembly. Eli is watching and learning, tying the finished packets. Soon, a distinctive smell rises from the pot. It is unlike anything we have ever cooked, and once the banana leaves are unwrapped and the golden hallacas are steaming on the plates, I am incredibly hungry. I can’t see how 24 will be enough for the eight of us. 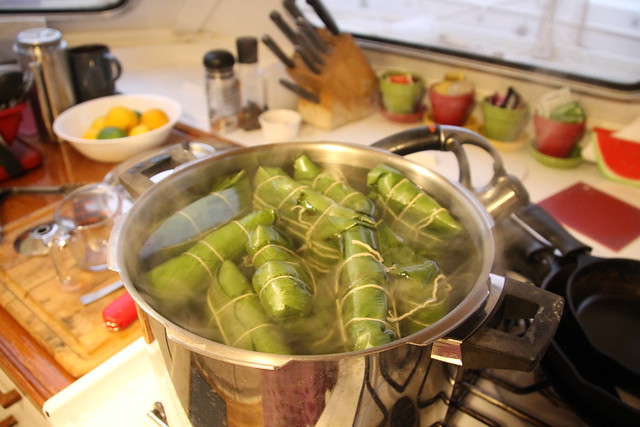 But our eyes are bigger than our stomachs—though delicious, the hallacas are very filling. We eat just over half of them, send David home with leftovers, and keep some for our lunch the next day. David instructs us to reheat them in boiling water, though Eli discovers they’re pretty good cold, pulled out of the fridge, unwrapped, and eaten on the spot. Teenage boys. 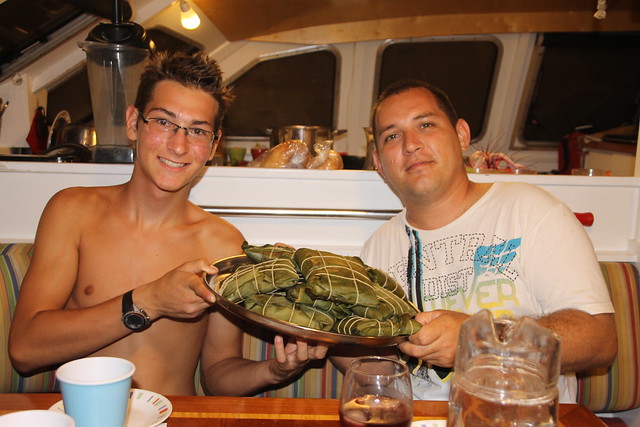 To David, we are so grateful. These are more than cooking classes—they are part of a cultural exchange, a language lesson, and a friendship. It is emblematic of something I love about a traveling life: meeting new people and forming symbiotic relationships. David teaches us to cook Venezuelan food and gives us an opportunity to speak Spanish, and we provide a family atmosphere and give him a chance to practice English. It’s an experience that leaves everyone feeling satisfied.