That’s right, folks, that wee little strip of land connecting good ole’ North and South America. Home of the Panama Canal, Manuel Noriega, and Chiquita Bananas. We’ve been living in the expat republic for several months now, and it’s pretty good. Panama seems like your typical Central American third-world country. The jungle is green, the sun is hot, and the rain is wet. Take Two is situated at Red Frog Beach Resort and Marina, on Isla Bastimentos. Bocas Town, the primary settlement, lies on Isla Colon, another large island a few miles to the north. 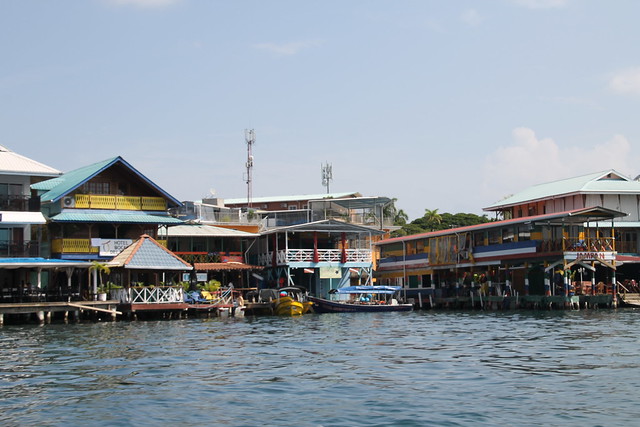 Aesthetically speaking, Bocas del Toro is a cool place. The islands are very different from the low limestone Cays in the Bahamas, or the rocky desert of Bonaire. They are rolling and hilly, rimmed with mangroves and covered with lush green jungle. Dotting the coasts of the islands are indigenous villages and gringo houses. The sides facing the Caribbean Sea have beautiful white-sand beaches lined with coconut palms. 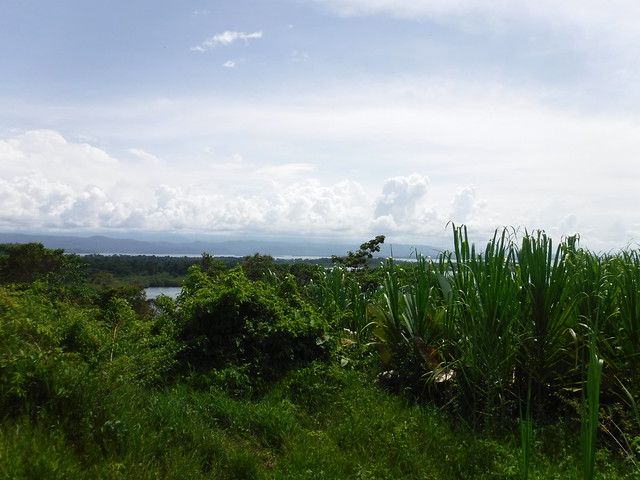 There are five basic types of people in Bocas. First, you have the Panameños, the Spanish-speaking Panamanians, that live in Bocas town and the surrounding area. Then there are the indigenous peoples. They live in small villages spread around the islands, paddle around in dugout cayucos, fish, and sell coconuts. There are also many people of African descent, as well as Chinese people. And last, but certainly not least, there are the gringos, the white people not born in Latin America. This category can be further sorted into to two sub-categories, with a few exceptions. In the first are the expat retirees, people generally over 50, who spend all or some of the year in Bocas. In the second, you have the backpackers, young singles or couples that migrate through Central and South America in an unending river with nothing but their flip-flops and the contents of their ever-present backpacks.

The preferred mode of transport for the non-indigenous people is the panga. A panga is a medium-sized fiberglass fishing/work boat, with a fabric sun-shade and oversize outboard. They are used by Panameños and gringos alike, and most of them seem to be in a perpetual state of disrepair. The closest equivalent land vehicle is the minibus. 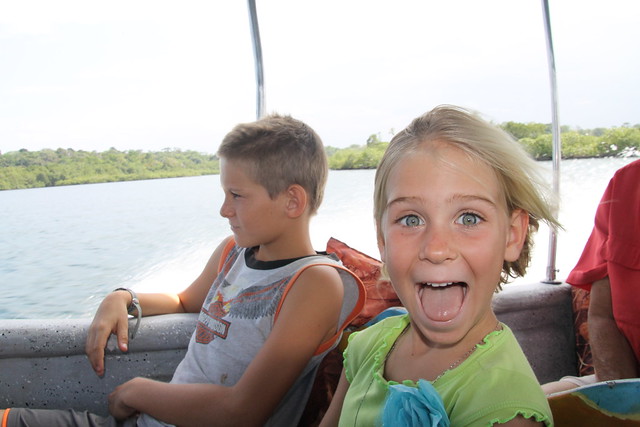 Since we arrived at Red Frog, we have made a few friends. The most notable is the family that owns Agua Dulce, the other marina on Isla Bastimentos. In addition to running a marina, they house volunteers, do panga and boat repair, and run a small medical clinic for the indigenous people. They have three kids who are home-schooled, fluent in Spanish, and reasonably good at ping-pong. 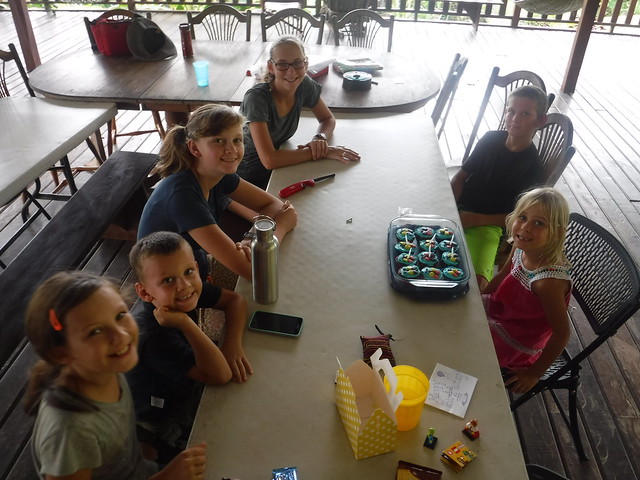 On weekdays, Aaron and I take the dinghy over and work at the shop from 1:00-5:00. The work varies from grinding metal and sanding boats, to cutting fiberglass and polishing T-tops. Once, I made a handle for a spigot that had rusted off. Despite the lack of pay (we are often referred to as ‘the interns’), the difficulty/danger of the work, and the fact that we frequently come home looking like chimney sweeps, it beats sitting around doing nothing and we get credit for high school “shop class.”

Every Tuesday, Mom and one lucky volunteer catch the free marina water taxi to Bocas town for groceries and packages. This involves hauling the Red Wagon all over town, in and out of five or six separate stores of varying degrees of cleanliness, and somehow dragging a weeks’ worth of food back to the taxi dock before one o’clock. The main duty of the lucky volunteer is to assist in the portage of the goods. He or she is also usually rewarded with a special treat of some kind. The weekly grocery haul sometimes lasts us less than a week, so further resupply excursions to the small marina store may be required.

On many weekends, we take the boat out of the marina and spend a night or two at anchor. This is the first place we have been able to do this easily. There are innumerable mangrove islands and coral reefs to explore in Bocas, and very few other boats, so it feels like we have the place to ourselves. We spend the weekend swimming, climbing the rigging, wake-boarding, and just generally remembering what it feels like to cruise on a sailboat. 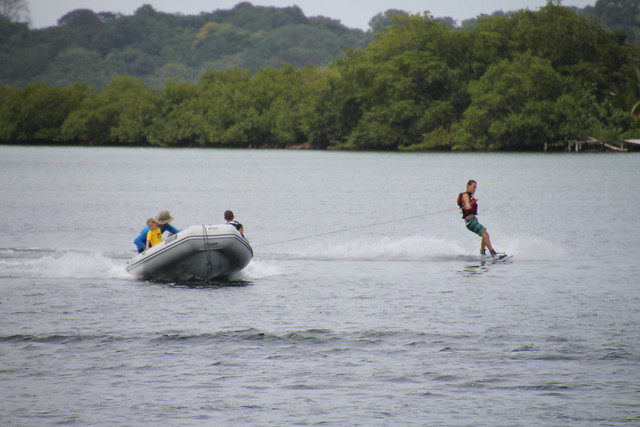 The water is pretty clear around here, but the snorkeling is not so great. There are a few good spots that we know about, but most of the coral is patchy and not very interesting. Of course, we are a bit spoiled in that department; compared to the Bahamas, the Virgin Islands, or Bonaire, poor Panama just is not that impressive. One thing it seems to have in abundance is lion-fish. One time while we were anchored out, Sam, Dad, and I speared over eight of the nasty little buggers in one afternoon. Unfortunately, they were too small to be worth the effort of filleting.

All the insects are extremely numerous and virile, from the army ants that will carry you off, too the Hercules beetles that will knock you over. The chitras, the local brand of biting no-see-um, are particularly irritating… or they would be, if we didn’t run the AC all night (and all day, as we are doing disturbingly more and more often). Mosquitos are less of a problem then we had originally anticipated, although rainy season has yet to start. I am very glad of this fact, given the quantity of readily available parasites just waiting for the opportunity to infect and permanently maim you (go Google Leishmaniasis or botfly to see what I mean). 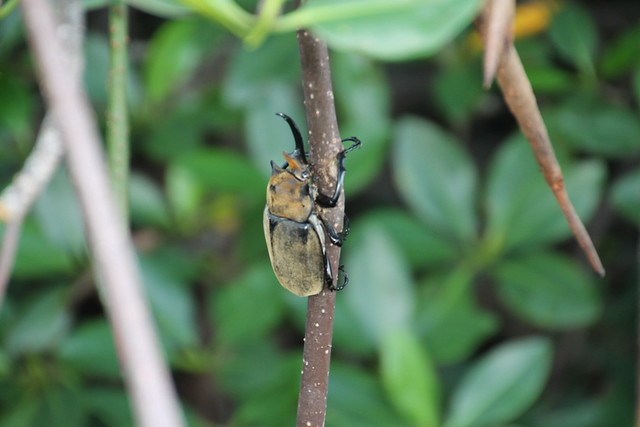 Aside from a trip to the interior to see the mountains and cloud forests, we have not done a lot of overland travel while we’ve been here. Our proximity to Costa Rica and the Pacific Coast of Central America makes those tempting destinations for future family outings. We’d also like to cruise back toward the islands of San Blas, and to central Panama to see the Panama Canal. For now, since Panama is south of the hurricane belt, we’ve decided to stick around and enjoy what this place has to offer.